FST is a statistic which seems simple at first yet quickly becomes very technical when you start reading the literature. I asked around my lab for advice and George pointed me to Bhatia et al. (2013) which provides some clear advice on how to estimate FST. However, Bhatia et al. were working with relatively well-studied human populations, and mosquito population genetics can get pretty extreme by comparison, so I didn’t want to take anything for granted.

To help explore the impact of different FST estimators and SNP ascertainment schemes, I implemented both the Weir and Cockerham estimator and the Hudson estimator in scikit-allel. This post gives some examples of using these functions with large scale SNP data, and some practical experiences from applying them to mosquito populations.

I have a copy of the Ag1000G phase 1 AR3 data release on a local drive. The SNP genotype data is available in an HDF5 file.

There are 9,643,193 SNPs on this chromosome, genotyped in 765 individuals, so this is a relatively big dataset, too big to work with in memory uncompressed. To cope with larger datasets, scikit-allel can run computations directly against the data on disk, and can also make use of compression to reduce data size.

This array would be 13.7G uncompressed, but genotype data compress very well, so the actual size on disk is only 548M.

There is also a table of sample metadata which we’ll need because it tells us which mosquito comes from which population.

The ‘index’ column in this table corresponds to the order of columns in the genotype array.

Now compute allele counts in each population. This takes a minute or so.

Finally, we can filter out variants that aren’t segregating in the union of our two populations. Let’s also filter out multiallelic variants for simplicity.

Note that the new genotype array we have created is in-memory, however we are making use of compressed arrays to store these intermediate data, so the amount of memory required is small. Btw don’t get confused with the name of the ‘compress’ method, this comes from numpy and means making a selection along a particular axis, it has nothing to do with data compression which is handled automatically by scikit-allel.

Let’s first compute the per-SNP FST value from each of the two estimators. The Weir & Cockerham estimator takes a little longer because it has to revisit the genotype data. The Hudson estimator is faster because it only needs the allele counts, which we’ve already computed. 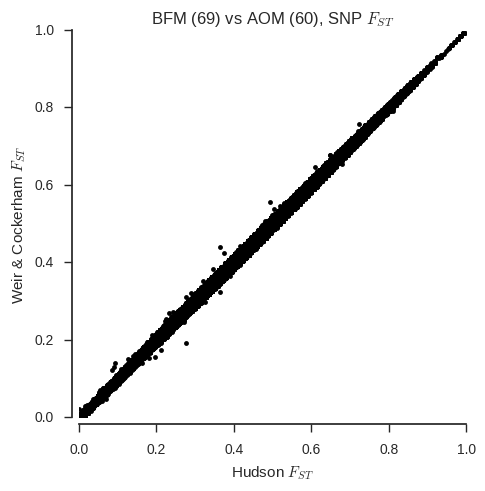 With a couple of exceptions, the two estimators are virtually identical for all SNPs. However, one thing that Bhatia et al. warn is that the Weir & Cockerham estimator can give different results if sample sizes are unequal. We’ve chosen two populations with similar sample sizes, but what happens if we fake one of the populations to have a much smaller sample size? 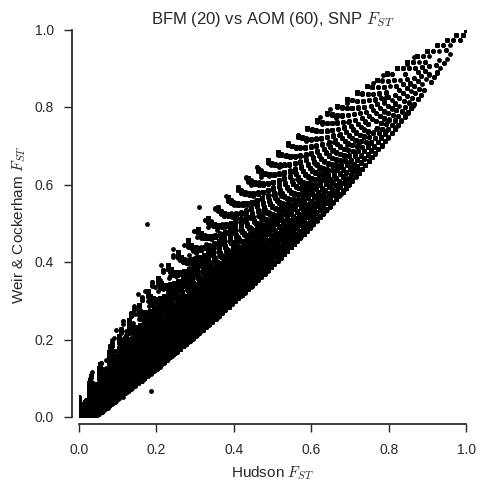 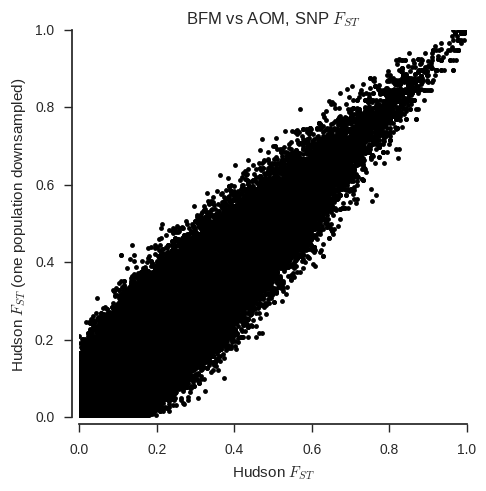 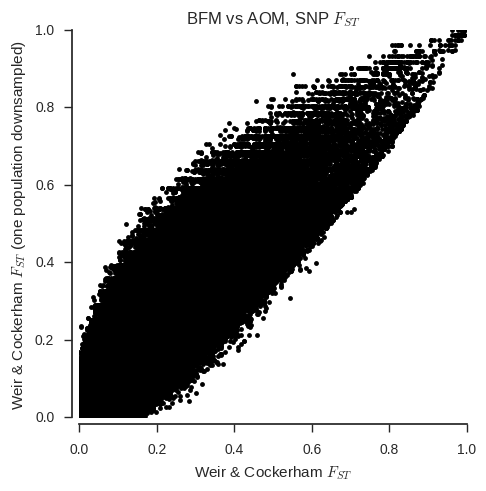 When the sample sizes are unequal, the correspondance between the two estimators is clearly much less. Also, the Weir & Cockerham estimator appears to be systematically different with and without one population down-sampled.

The two estimates are very close, well within one standard error.

How about with one population downsampled to 20?

The two estimates are now separated by about two standard errors, with the Weir & Cockerham estimator inflated relative to the estimate with full samples from both populations

Another issue that Bhatia et al. discuss is SNP ascertainment. Basically, how you choose which SNPs to use when estimating FST can make a difference. As I understand it, when computing average FST you want to use a set of SNPs which segregated in the ancestral population, because changes in allele frequency at these SNPs will tell you something about genetic drift.

The spread of values here is more than three standard errors, so clearly ascertainment makes a difference. Here I’d be inclined to use SNPs segregating in both populations as it is a stricter criterion, however comments very welcome.

Finally, let’s plot FST over the chromosome, to see if any regions are particularly differentiated.

This plot suggests some genome regions where FST is higher than the chromosome-wide average, which are interesting to follow up.

Hudson’s FST estimator is more robust to unequal sample sizes, and faster to compute because it only requires allele counts as input.

SNP ascertainment also makes a difference. It’s probably a good idea to try different ascertainment schemes to see what impact they have on the results.