Why do I care about compression?

Fast compression brings interactive analysis of genome variation data within reach of pretty much anyone with a computer. No need for a high-performance compute cluster. No need for a degree in software engineering. So it’s not just a geeky obsession with making stuff go faster. It’s also about making the data accessible to a broader audience and a deeper kind of exploration.

The data used in this benchmark are genotype data from the Ag1000G project phase 1 AR3 data release and can be downloaded via FTP. The goal of this benchmark is compare compression ratio and speed of compression and decompression for a variety of different compressors. For convenience I won’t use all of the data, but will extract a sample of 2 million rows from a genotype array.

The integer values in the array represent different DNA nucleotides (A, C, G, T, missing). However, rather than have a fixed code (0->A, 1->C, etc.), the encoding is based on comparison with a reference nucleotide sequence for the species being studied. A value of 0 means identical to the reference, a value of 1 or greater means different from the reference, and a negative value means missing.

Because most individuals within a species share much of their DNA sequence in common with each other, genotype data are generally very sparse, in the sense that the vast majority of values are zero (identical to the reference). This sparseness is the main reason why genotype data compress well. Also, for organisms like humans where genetic diversity is relatively low, almost all non-zero values are 1. For organisms like mosquitoes where diversity is higher, a larger fraction of values can be greater than 1, although the data are still very sparse. If we are dealing with nucleotide variation (as is the case here) the maximum value is 3. 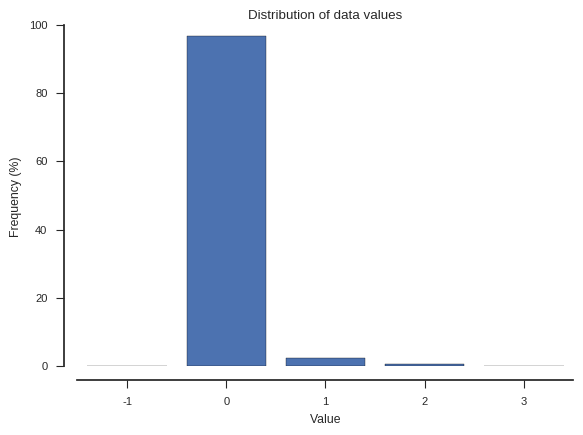 For the benchmark I’m going to store the data via Zarr which splits the data into chunks and compresses each chunk separately. Compressed data will be stored to and retrieved from main memory.

For the purposes of this benchmark I’m going to chunk only along the first dimension. In practice a different chunk shape may be used depending on how the data will be accessed, however this blog post is focusing on comparing compressors and this simple chunk shape helps to provide a more direct comparison.

I’m also going to use a relatively large chunk size - 16M - because I’ve found (during the process of setting up this benchmark) that this shows the compressors in their best light. Again, in practice, a different chunk size may be better, depending on how the data will be accessed.

The Python standard library provides three compression libraries: Zlib, BZ2 and LZMA. I’m including these in the benchmark for comparison, but although they provide good compression ratios, they are typically too slow for interactive data analysis. The main comparisons will be between different configurations of the Blosc compression library.

Blosc is a meta-compressor which accelerates compression by using multiple threads and by splitting data into smaller blocks that fit well with CPU cache architecture. There are a number of different compression algorithms which can be used within Blosc, including LZ4, Zstandard, Zlib and BloscLZ. Blosc also provides hardware-optimized implementations of shuffle filters, which can improve compression ratio for some data. Because I am dealing with single-byte data, I am particularly interested in how the bit-shuffle filter affects compression ratio and performance.

Note that NOSHUFFLE and BITSHUFFLE are numeric constants with values 0 and 2 respectively: 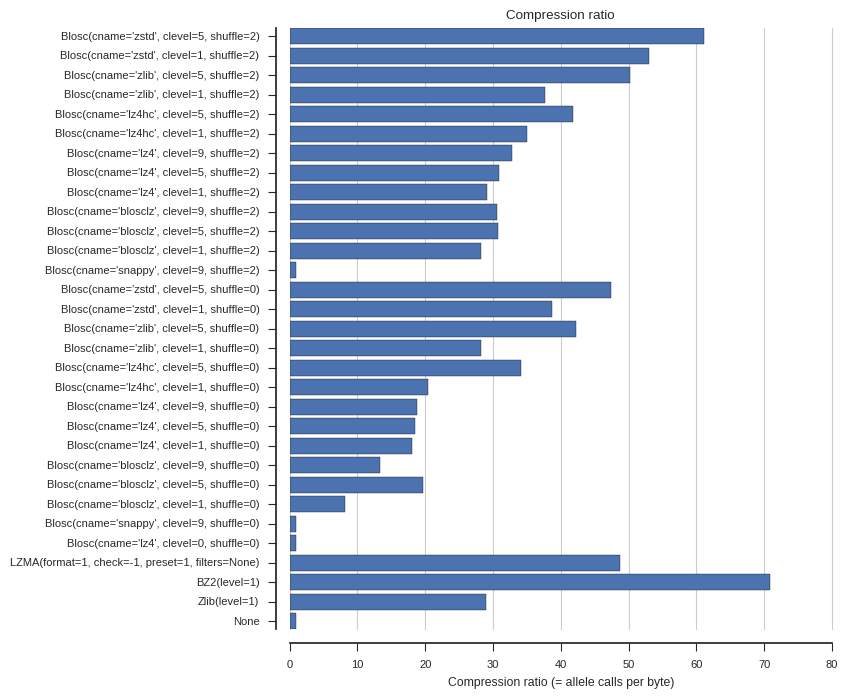 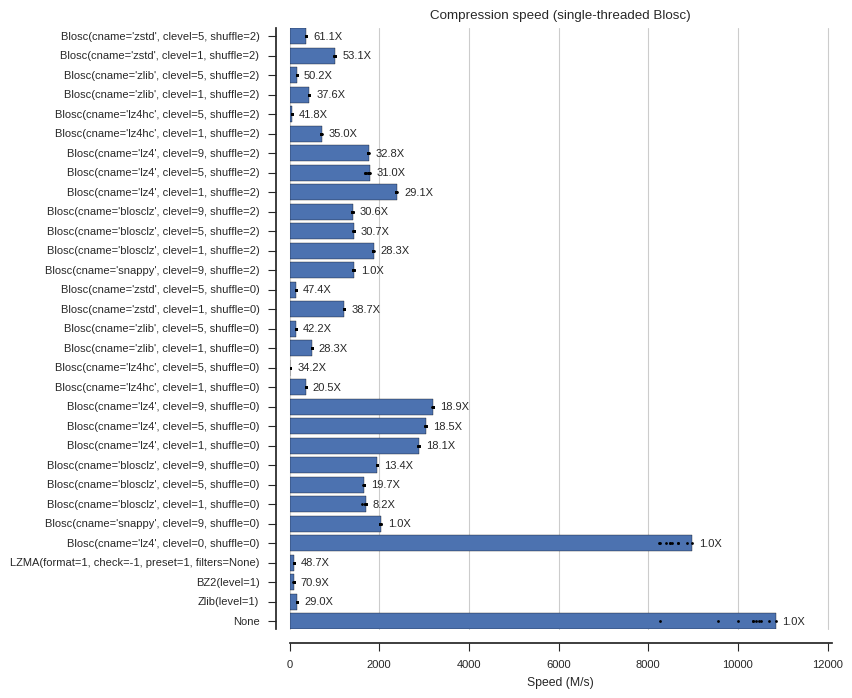 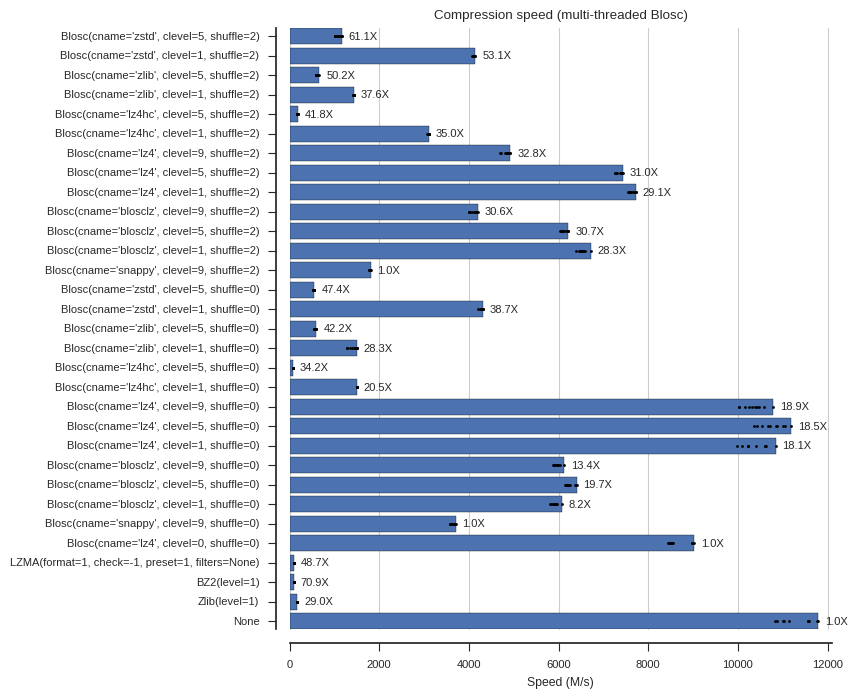 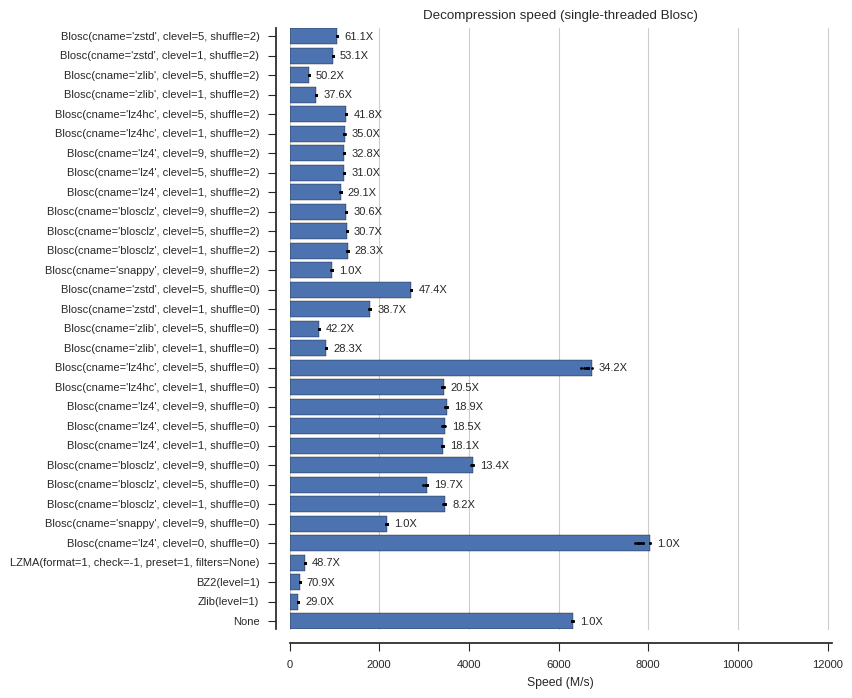 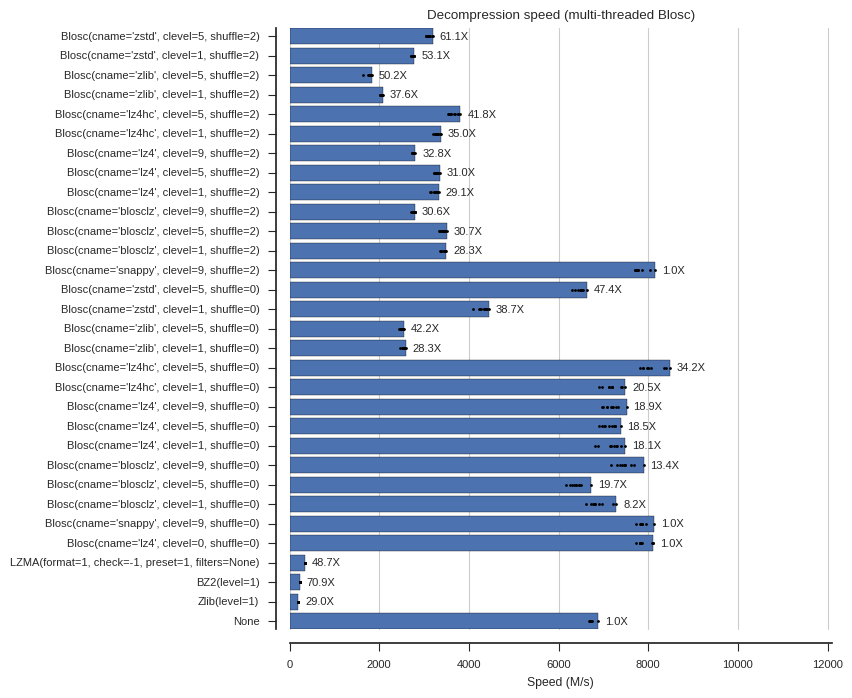 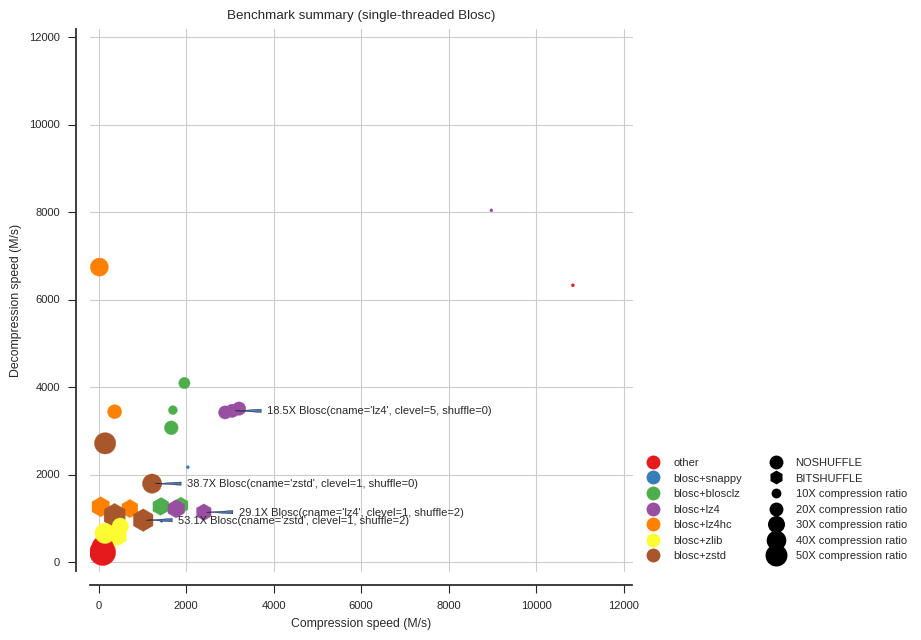 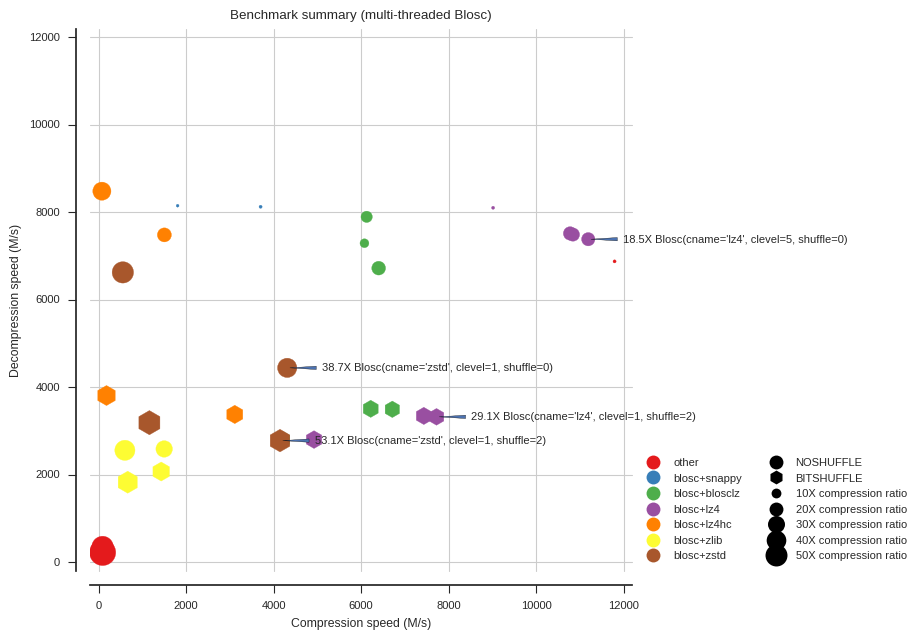 There are multiple interacting factors at work here, including data, software and hardware. Your mileage may vary substantially. Running your own benchmark is highly recommended.

So when using single-threaded Blosc, chunk size doesn’t matter much. When using multiple threads chunk size has a big effect.

So block size matters but only when using multiple threads.

Again this shows that multi-threading only provides good acceleration when block sizes are larger.